In 2019, I read online of socialite Anna Delvey, arrested for conning banks, hotels, and even friends. Her story has now been turned into a Netflix mini-series called Inventing Anna. She was born Anna Sokorin and is the child of Russian immigrants who settled in Germany. Her father ran a transport company and later an HVAC company.

She got into the fashion industry by interning in Paris at a French fashion magazine called Purple. She transferred to the New York office, where she quit after a short while. At this point, she changed her name to Anna Delvey, claiming it was her mother’s maiden name.

Here she started attending parties with wealthy patrons and fabricated a story that she was a wealthy heiress. She forged documents and got loans from banks, allowing her to live in hotels, spend lavishly, and tip the hotel staff with $100 bills. She bragged about the brands of clothes she wore and created a social media presence for herself. There were times when Sorokin would skip out on paying or would get others to pay for her by saying she was waiting for wire transfers.

She stated that one of her objectives was to create an arts centre for a multi-purpose events venue, art studios, and pop-up shops. Apparently, she was trying to build this by raising funds and socially fraternising with wealthy individuals.

One friend she duped into paying for a vacation to Morocco was Rachel Williams. Because of “credit card issues”, she asked Williams to cover the expenses at a sum of $62,000 with a promise to her back. Sorokin returned only $5000, leaving Williams to foot the remainder of the bill. Williams was instrumental in bringing the scam to a halt, leading the Sorokin’s arrest.

During her trial, she refused to wear court provided clothing and threw a temper tantrum because of the clothes resulting in one day of the trial being delayed by an hour and a half. She was convicted and given a 4-12 year sentence in April 2019. Sorokin was released on probation in February 2021 but arrested again six weeks later by Immigration and Customs Enforcement (ICE) and is awaiting deportation to Germany, which she is contesting.

Anna Sokorin was born on 23 January 1991 in Domodedovo, Russia. There is no birth time recorded, but if we look at the noon chart, it gives her a 30° Aries Moon. Her penchant for lavish and luxury does not correspond to an Aries Moon. A Taurus Moon would be more apropos, leading to her being born later in the day.

While there might be an argument for a 12:05 birth, this time would give her a first house Mars. While she was brash and arrogant at times, she wasn’t necessarily confrontational. Also, I would not put her Sun below the horizon because she wants to be seen. 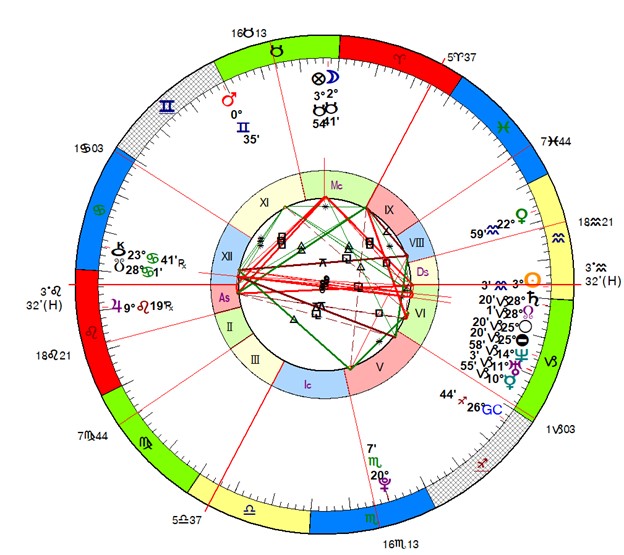 What this chart has is Leo on the Ascendant. Leo likes to be seen and want to be adorned and the star of the show. Leos also want to be loved. With the Sun in Aquarius, a cold and somewhat removed placement and opposite the ascendant, there is a possibility she was trying to achieve acceptance of her father.

The Sun, being the ruler of the first house, and in the seventh suggests, she was trying to achieve acceptance from others. The seventh house is of relationships, and Aquarius is associated with groups. All of this combined means she just wanted approval from groups, other people, or her father.

While some people might feel her arrogance and rudeness might be attributed to Mars, I would suggest this is attributed to Jupiter and not Mars. Jupiter can be bloated and have the air of high and mightiness, and in Leo, it can be associated with grandeur. While she would have Jupiter in Leo no matter what time she was born, but at 16:40, it puts Jupiter in her first house. At its worst, it is vain, arrogant and condescending. The Leo Jupiter can be full of grandeur, so once you combine Jupiter in the first house with Jupiter in Leo, it is about being the queen with all the accoutrements that come with that title.

Sorokin was born with a retrograde Jupiter opposite the Sun. In her book, Retrograde Planets, Erin Sullivan states:

“The opposition of the Sun to Jupiter manifests in inflation, where the Sun’s power as a vehicle for the ego is magnified, and feelings of omnipotence charge the system.”

The Taurus Moon mentioned earlier is about having a luxurious lifestyle, and this chart puts the Moon in the 10th house for the public to see. She wanted to be seen as living the high life. The Moon is a degree from the Part of Fortune. Martin Schulman states that the Taurus Part of Fortune’s greatest joy is personal love. The Moon is where we get our needs met, so combining this Part of Fortune with the Leo Ascendant reiterates the sense that she wanted to have love in her life.

The Sun square the Moon implies, to her, that her parents did not get along. Whether that is true or not, this is her chart and her reality. The Sun is also opposite the Ascendant, and the Moon squares the Ascendant, suggesting she did not get along with her parents. According to the Netflix production, the lawyer telephoned the father to help her out when she got into trouble, but he refused.

When Sorokin was arrested on 3 October 2017, the previous solar eclipse occurred in her second house of money. She had the asteroid/dwarf planet Ceres on her Ascendant opposite her Sun and square her Moon. According to Demetra George in her book Asteroid Goddesses, Ceres can highlight parent-child issues. Her arrest could be considered a parent (authority) disciplining, and like the spoiled child (Jupiter-Leo), she threw a temper tantrum at her parents (the court). 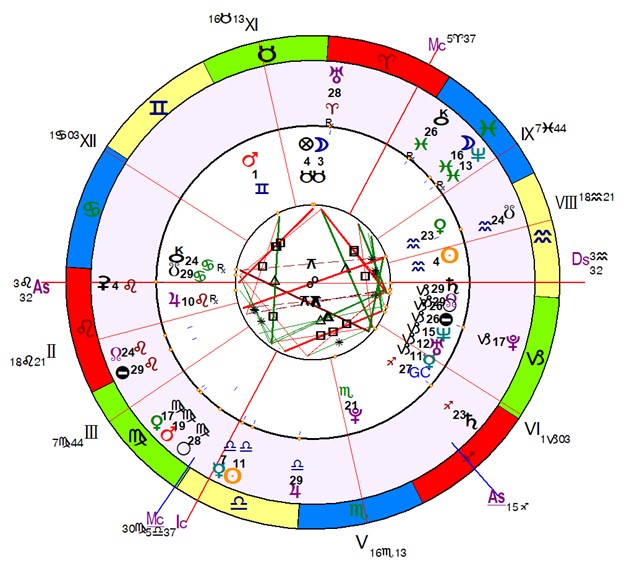 On the day of the arrest, the solar arcs for this chart hit the mark. 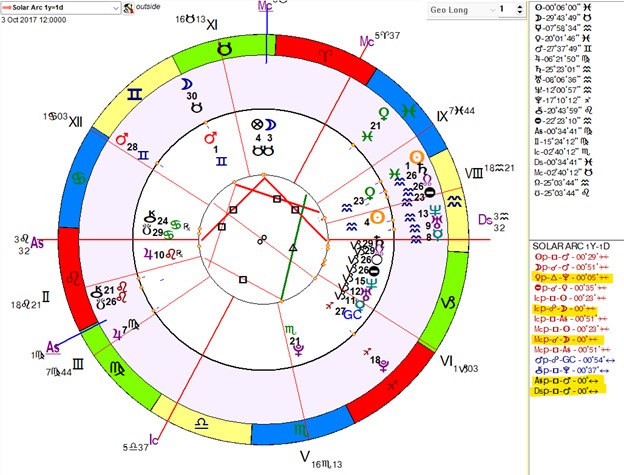 The Midheaven has solar arced to be exactly conjunct the Moon on the day of the arrest, and the Moon rules her twelfth house of self-undoing, so the public got to see her self-destruction. At the same time, the solar arc Ascendant is in a partile square to her natal Mars, the ruler of her Midheaven and the fifth house of creativity or her child. Her child was a concept of an arts centre, and the solar arc Ascendant was in a conflicting square to that child.

If this chart is correct, we could expect a judgement in mid-April with the execution of the order to be performed in June of 2022.