I am part of an astrological research team called the Astrological Investigators or affectionately known as the Gators.  The Gators are led by world renowned astrologer Alphee Lavoie.  This study was performed using the Fast Research module of the Air Software developed by Alphee Lavoie (www.alphee.com). The software was specifically designed for astrological research. The goal of the group is either confirm astrological hypotheses or disprove them with respect to health, wealth, weather prediction, marriage and other techniques used by astrologers.  Alphee and I both come from a scientific backgrounds with engineering degrees and we have had statisticians as part of research group and guiding the construction of the software.  The Astrological Investigators website is www.astroinvestigators.com. 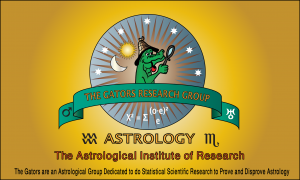 The astrological chart is an assessment of a person’s potential in various facets of life such as career, relationships and as well as health. The purpose of this study is to determine the astrological characteristics or signature that appear in the birth charts of people who have been diagnosed breast cancer.   Once a signature is established, it can be used to help predict the potential of breast cancer in a subject using their birth chart.  The key point being this is the subject’s potential of breast cancer.  There are many contributing factors to cancer such as life style, genetics and stress, to name a few, but the advantage to knowing if the potential is there, one can then adjust their lifestyle.

In order to be able to predict cancer based on an astrological chart, one would need to ensure the data comes from astrologers who had personally worked with the client in the past.  Moreover, in order to conduct a meaningful study, a sizable amount of data is required. 316 timed charts with a Roden rating of AA were collected for this study.

In astrology, breasts are represented by the Moon in a person’s chart. The Moon rules several aspects such as childhood, our mother, and our feelings. The focus of this study will be on connections to the Moon and the astrological sign of Cancer, which the Moon rules, to breast cancer. There will be two subsequent studies on breast cancer. One on Venus which rules the feminine and thus also rules the breasts and final one which will also encompass the other facets such as Ascendant, Sun sign the 6th house of illness combined with Moon and Venus aspects.

The scope of this study will examine astrological factors affecting the Moon such as the aspect it makes to other planets, the Moon’s placement, phase, and as well as other factors.

The astrological house system used in the study is Placidus.

In a statistical analysis, one of the key measuring factors is the Chi Square. I’m not going to get into an explanation of calculating Chi Square here as you can look that up on your own if you are interested but you’ll have to go back to university statistics for that. Chi Square is a statistical test that compares the measured value to the expected norm for that measurement.

The breast cancer data consisted of 316 astrological charts. They were analysed using the Air Software (www.alphee.com) module Fast Research to determine the major contributors. A Chi Square = 1 is considered to be as good as chance or 50-50. The software was set to list only the contributors that gave a Chi Square of 2 or greater than chance and will indicate whether or not the contributor happened often or seldom. In order to determine the Chi Square, the breast cancer charts were compared against a control group. Seldom occurrences are as important as the ones that happen often.

Table 2. Characteristics Not Found in Breast Cancer in Birth Charts

The definition of a Neural Network from Wikipedia:

“In machine learning, artificial neural networks (ANNs) are a family of statistical learning algorithms inspired by biological neural networks (the central nervous systems of animals, in particular the brain) and are used to estimate or approximate functions that can depend on a large number of inputs and are generally unknown. Artificial neural networks are generally presented as systems of interconnected “neurons” which can compute values from inputs, and are capable of machine learning as well as pattern recognition thanks to their adaptive nature.”

Below is a video which has basic explanation of what a neural net is: https://www.youtube.com/watch?v=DG5-UyRBQD4

It is also called a Black Box model because what happens between the input and output is not known. The Fast Research programme has the capability to take all the contributors from the model based on what occurs often and what occurs seldom and develop a Neural Network which can predict the outcome based on all aspects of the chart. The inputs are weighted.  The model is set up to assign Chi Squares of 4 or greater a weighting of +10 or -10 depending on if it happens often or seldom. Chi Squares of 2-3.99 are weighted at +/-5.

The input data for the model, 316 breast cancer charts, is randomly selected divided into a learning group (75%) and the testing group (25%).   The concept of the Neural Net is to have it converge such that the learning group meets the yes condition 99% of the time and the test group meets the yes condition over 85%. This model for the modern rulerships did meet the convergent conditions. The accuracy of the model is verified such that the input data should score “Yes” and any non-breast cancer data should score “No”. 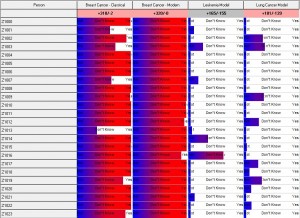 Figure 2 below is a slice of the neural net results run for a random group of cancers. A positive chart for breast cancer will result in a completely coloured bar with no white background.   In column one is the code name for chart being examined.  Z is our code for breast cancer, L is lung cancer, N is non-defined, K is leukemia, T is throat, B is brain, etc. As before, the second column is our model for breast cancer with classical rulership then the third is the model with modern rulership.   Models for leukemia and lung cancer were able to pick up their respective cancer charts as they show a completely coloured bar with no white background.   One will notice that in a few instances the breast cancer model picked up lung cancer and often N – unknown will be picked up by the models.’ 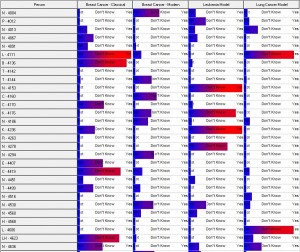 Figure 2. Other Forms of Cancer 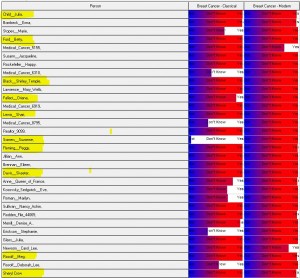 In this study, we can see the model has actually performed well just using the Moon in the analysis where Modern rulership predicted breast cancer fully 95% of the time and classical rulership only 87% of the time based the ¾ red bar rule. We have developed the list of criteria that indicate breast cancer however, it is important to note that if one or two of the criteria are met, it does not mean the native will have breast cancer. The Neural Net examines the totals of the Often and Seldom criteria. Two high ranking Often will be negated by several Seldom criteria.

If the Neural Net analysis shows someone scoring high for breast cancer it is still dependant on life situations since the astrological chart is one of potentials.

We will be performing an analysis based on Venus and then adding in the Ascendant and Sun to build up to a complete model. We would still need more data in order to refine the model. We are continuing our studies and developing models that can predict various aspects of life such as career, wealth, and other areas of health.

The Astrological Investigators would like to collect more data on breast cancer.  If you have had breast cancer and know if you know someone who has had it, we would need your birthday, place of birth and the exact time of birth. Please feel free to contact me.  Please note: this is astrology and the exact time of birth needs to be known.  If a birth time is off by 16 minutes, predictions can be off by 4 years.