Desmond Tutu was an Anglican Archbishop from South Africa who rose to fame and popularity as an opponent to Apartheid, South Africa’s brutal segregation policies. He was the first black bishop and then the first archbishop in South Africa.

After the fall of Apartheid, he continued fighting for the rights of the underprivileged, the oppressed, fighting sexism, and being a champion of gay rights. He won the Nobel Peace Prize in 1984, several others after that. 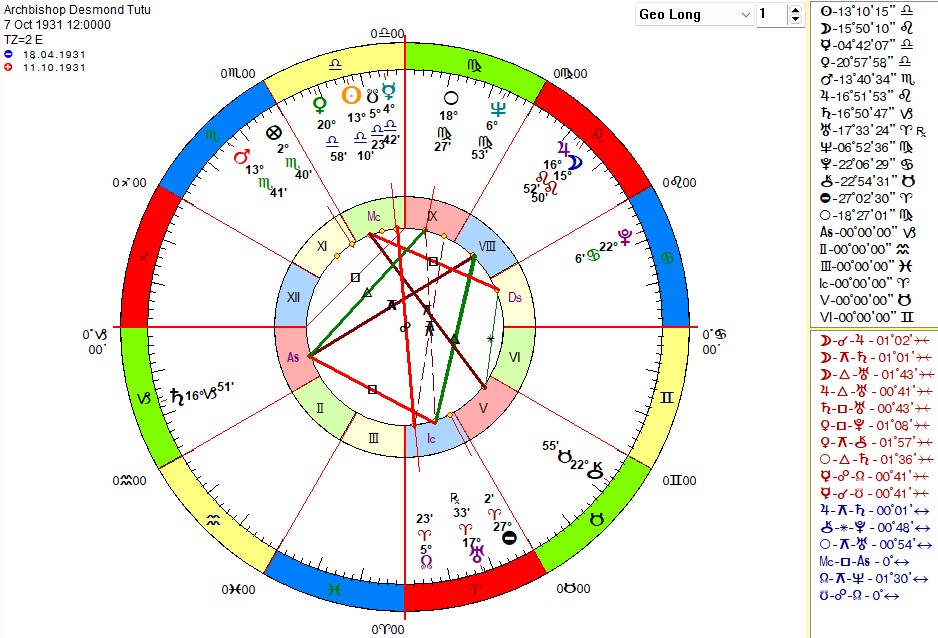 Since we don’t know the time he was born, we cannot look at house rulerships, but there is plenty to see in the chart here.  Firstly, he has three planets and the South Node in Libra. Libra is the sign of balance, diplomacy and equality. The Sun is his identity and his intrinsic nature. Venus is the planet of his values, while Mercury is his thinking and his method of communication. These placements can be seen as factors in his ability to advocate for justice. He acted as a fulcrum by getting both sides to listen to each other.

He has South Node, with the North Node in Aries. The nodes of the Moon represent a past life (south) and future direction (north).  If you don’t believe in past lives, then it means the traits that come naturally and the ones you need to develop. With the three planets in Libra giving him the sense of equality and balance, he knew how to do that naturally via his South Node. The spark was his North Node in the combative and tireless Aries. He took the diplomacy skills and championed the oppressed peoples of South Africa and later for gay rights.

Adding to this is Uranus opposite Venus and his Sun. Uranus is the planet of rebellion, equality, and brotherhood. He helped rebel against the oppressive society he was born under by using his speech and his personality.

He was born with a Pluto opposition to Saturn, which can be described as destroying or tearing down the status quo structure. The Saturn-Pluto opposition was squaring his Uranus-Sun/Venus opposition forming a powerful dynamic called a grand cross in cardinal signs. This is a potent combination meaning that a person born with a grand cross will have a power signature of taking action and initiating action. They start things through the tension of the planets involved. Power/transformation opposite order and squaring rebellion and values/his identity in a diplomatic sign.

As you can see, even without house positions, we know quite a bit about Archbishop Tutu. Rest in Peace, and thanks for your contribution to society.