Do Animals Have Souls?

If you were to ask a typical monotheistic holy man like a priest, rabbi or a imam if animals have souls, you would probably get a resounding “NO!”. In mythology of the “three main religions” we are created outside of the chain of nature – formed from dust or a rib bone as the animals were created earlier. It is interesting to note that Adam and Eve begat Cain and Abel so if incest with the mother didn’t occur then Cain after killing his brother must have bred with someone else, wouldn’t he? This is obviously the case as he went to the land of Nod to start a life with the inhabitants there, who were obviously created at a different time than Yahweh’s biological experiment in Genesis.

On the other hand Native American or African belief systems, we are from the animal kingdom and linked to them. Being raised Catholic I was taught to believe this was the not the case but if you consult many a pet owner and you will see loyalty, playfulness, frustration and anger described in their pets. Talk to anyone who took the dog to the cottage and left the cat at home. Ask them where the cat pooed or peed! Surely, they cannot communicate or reason like us humans but they have their own way. My cat Lily, has actually learned how to say water. I am always talking to her and when I gave her food I say breakfast or dinner and I say “here’s your water”. I was totally surprised when I heard Lily say “wawa”. I was busy making my lunch and I said to myself, did I just hear the cat say “wawa”? Sure enough, when I looked at her water bowl, it was empty. I like to pull my step-daughter’s leg a lot so when I told her, she just rolled her eyes until the morning she heard it for herself! “She said WATER!!! OMG”. Anyway, I had two very profound experiences with my birds who have both passed on which have convinced me animals do have souls. 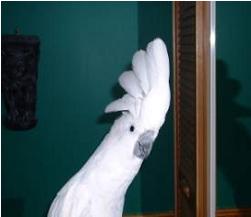 Coco, the umbrella cockatoo, was funny girl. I got her when she was five. She played peekaboo and hated my toes. Her normal British toned “hello” which she picked up from her previous owner would transform into a deep guttural hello only when the phone rang as a result of living with me. Whenever the phone rang, you would hear the deep voiced hello. Her cage was in the dining room and my office was upstairs next to my bedroom. I would bring her up to my office and sit her on a stand and we would keep each other company along with the cat and the little bird, Fonzie. She would often loudly mimic me when I was on the phone which was a bit embarrassing having to explain to the customer/coworkers that my parrot was mocking me. It usually got a laugh out of them.

It was the spring of 2005 and she got ill. Without getting into details, her cloaca (uterus/bladder/colon type thing) was prolapsed. You can look it up if you want the details but she required surgery. Basically, unlike relationships with dogs, relationships with a single parrot is not one of alpha bird and beta bird. Unlike cats, it is not like daddy bird and baby bird, but rather it is spousal relationship; your parrot thinks you are a married couple. It was that she loved me so much she would not stop laying eggs for me. Anyway, I took her in to be operated on a Monday and the first operation didn’t work as the cloaca prolapsed again. I was scheduled to bring her in on the Friday for a second attempt. I was working from home those days so I dropped her off at the vet and returned home to work. My routine was to work out at noon and have lunch at my desk in the afternoon.

I remember the day vividly. I had just finished with some bench presses and was going to move on to my next set of exercises when I heard a woman’s voice say:

“Do I have your permission to die?”

I looked around bewildered realising I had not heard that voice with my ears because it was more like a thought but not my thought. I sat there puzzled, figuring it might be the bird and said out loud,

“Yes, you have my permission to die. Okay…..now that was weird!”

I shrugged my shoulders and continued my workout thinking about whether I thought that and realising that it did not come from me. Five minutes later, the telephone rang is and it was the veterinarian. He told me that the operation went well and however her heart rate started to go down. I said to him,

“That’s okay. Five minutes ago I gave her permission to die.”

“What? You kidding me? That’s when her heart rate started to drop!”

I explained to him about my belief system for a bit after which he said if I wanted to see her I should head to the clinic right away. By the time I got there, she had already moved on. He was visibly shaken up by this and I was consoling him. He explained that just a few months earlier, his cockatoo passed away because she was egg bound, the egg got stuck because it was breach. As I drove home, I could feel her flying above my car bigger than life. 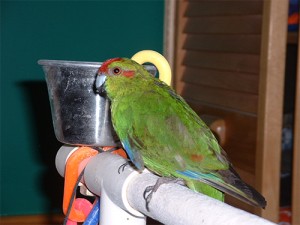 Alfonso or Fonzie was a kakariki or a New Zealand parakeet who came to live with us in March of 1999. I believe he was just a few months old. Kakarikis are kind of like a budgie/love bird looking critter. Because he lived with the big bird and a cat, I kept him in the cage. When I did let him go it would be when he was alone with me and sometimes with Coco but she would nip at him so I tried to avoid that. Occasionally, Lily the cat would jump at his cage as he was fluttering about. However, most of his time was spent eating and regurgitating his food in order to feed the bird in the mirror. It was quite a disgusting process but he seemed happy.

As of 2009, I was no longer working from home. So I would bring Fonzie’s cage into whichever room I was in so I could keep him company. I particularly paid attention to him because kakarikis live anywhere from 4-12 years of age according to one website I found. Another website said they can live anywhere to 15-20 but yet another I found states they tend to live 6 years in captivity. Regardless, he was pushing towards 12 and was slowing down a bit.

It was a night in December of 2010 where I got home from work and went off to band rehearsal with a friend mine, since it was his first night out with us he drove us to the studio. After rehearsal he asked what I was doing and I said just going make some pasta and salad and invited him to have supper with me. I was distracted this night and didn’t get Fonzie from my office. Well, we ate and were just sitting around talking about this that and the other with the cat on the floor just to my right when all of a sudden I see a golden orb about the size of a softball in front of me. This friend was from the Pagan community so he didn’t think I had lost my mind when I told him.

“Look! There’s a golden orb that just appeared. It’s now flying down towards the cat!”

At this point the orb zipped past the cat’s nose and she actually moved her head back.

“Now it’s looping around and it’s going out the back door. Look the cat is watching it too.”

At this point the orb went out the back door and was gone. We talked a while longer until we realised it was a quarter to eleven and so we decided to call it a night and he left and I cleaned up a bit and called my girlfriend before I went to bed. I was bringing my guitar upstairs to the office and I was telling her all about the orb and that is when I looked at Fonzie’s cage. He was lying down on the bottom.

I reached into the cage to pet him and he was still warm. That’s when I just realised the golden orb was Fonzie and he came to say goodbye, taking time to dive bomb the cat before he left. This time, for sure, I was convinced that animals have a soul.