All countries have a birth chart, and actually, some have several.   A country like Iran, or Persia, has been around for ages makes it difficult to pinpoint the start of the nation.   However, there was an event in 1979 which laid down the foundation for a new country.

In 1979, there was a revolution in the country that lead to forming the Islamic Republic of Iran.  The date for the formation of this new country was  1 April 1979 at 15:00.  Like a person, a country will go through its ups and downs and will be reflected by transits, progressions and other astrological phenomena. 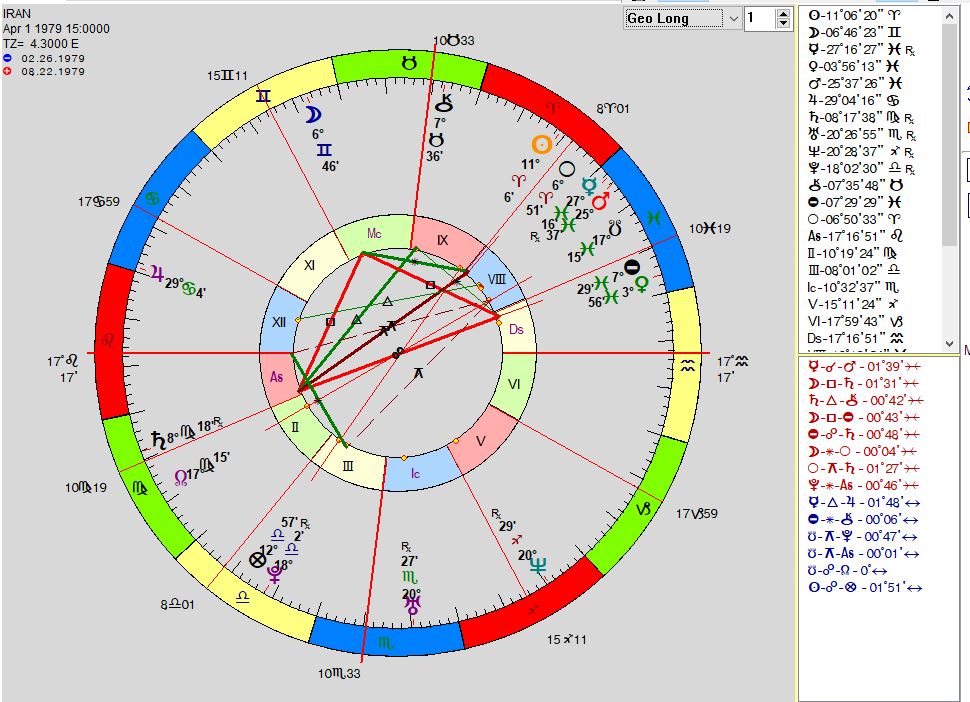 In the chart, the rising sign is Leo, and it is ruled by the Sun, which is in the 9th house of religion.  This placement is indicative of a Republic based on religion.  Saturn, the planet of limits and controls, is in the first house suggesting an authoritarian rule.  Moreover, it is in a karmic and challenging aspect to the Sun, which rules the people.

Saturn is also opposite Venus, the planet the rules women.  The status of women has suffered under the republic.  Before 1979, it was Muslim culture but very sectarian.  After the revolution, strict clothing rules were forced on women where they suffer the consequences of the state if they do not comply, albeit the rules are not a bad as Saudi Arabia.  Women get harassed for not wearing their hijab “correctly”.  Women are banned from attending male sporting events, and Instagrammers will get arrested and lashes for not obeying “morality” laws.

Pluto, the planet of power and control is in the 3rd house of communication, indicative of a nation who has total control of the media in the country.  Artists who paint or express their art in a way not approved by the morality squad will be forced to leave the country or face legal repercussions.

These themes are also shown in the declination of the planets.  Declination of a planet is its placement above or below the celestial equator.  The chart below shows that Neptune and Jupiter are contra-parallel in declination, showing there is a polarity between spirituality and religion.  Saturn and Pluto, the planets of power and control are parallel, and both are contra-parallel to Venus (women).

As stated earlier, the chart of nations is subject to the planetary movements.  In July of 2018, the Descendant, the ruler of open enemies, was conjunct Mars, the planet of conflicts, in the 8th house of other country’s resources. 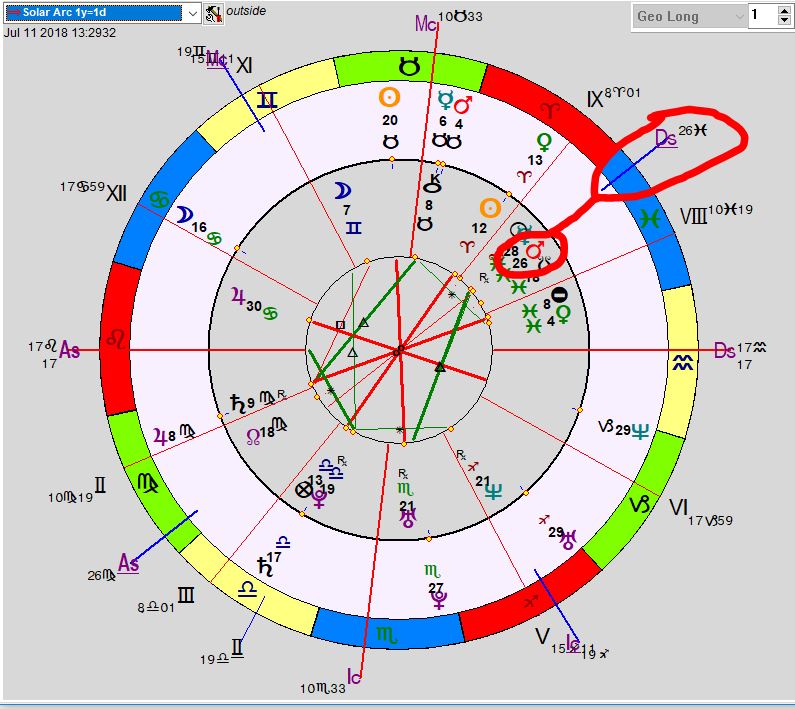 At that time, a Saudi oil tanker on its way to Egypt was attacked by what was believed to be Iranian backed militants.  This event started some vocal tensions between the presidents of the USA and Iran.

To Iranian President Rouhani: NEVER, EVER THREATEN THE UNITED STATES AGAIN OR YOU WILL SUFFER CONSEQUENCES THE LIKES OF WHICH FEW THROUGHOUT HISTORY HAVE EVER SUFFERED BEFORE. WE ARE NO LONGER A COUNTRY THAT WILL STAND FOR YOUR DEMENTED WORDS OF VIOLENCE & DEATH. BE CAUTIOUS!— Donald J. Trump (@realDonaldTrump) 23 July 2018

“We are near you, where you can’t even imagine we are ready. We are the man of this arena.”

While the possibility of a war between Iran and the United States was considered to be extremely low, political analysts were worried that escalating threats could have lead to something more serious at that time.

On 3 January 2020, the USA lead drone strike against the Iranian General Qasem Soleimani while he was visiting in Iraq.  Soleimani headed up the Iranian Revolutionary Guards’ Quds Force, specializing in unconventional warfare and military intelligence operations.  The killing raised tensions between the two nations re 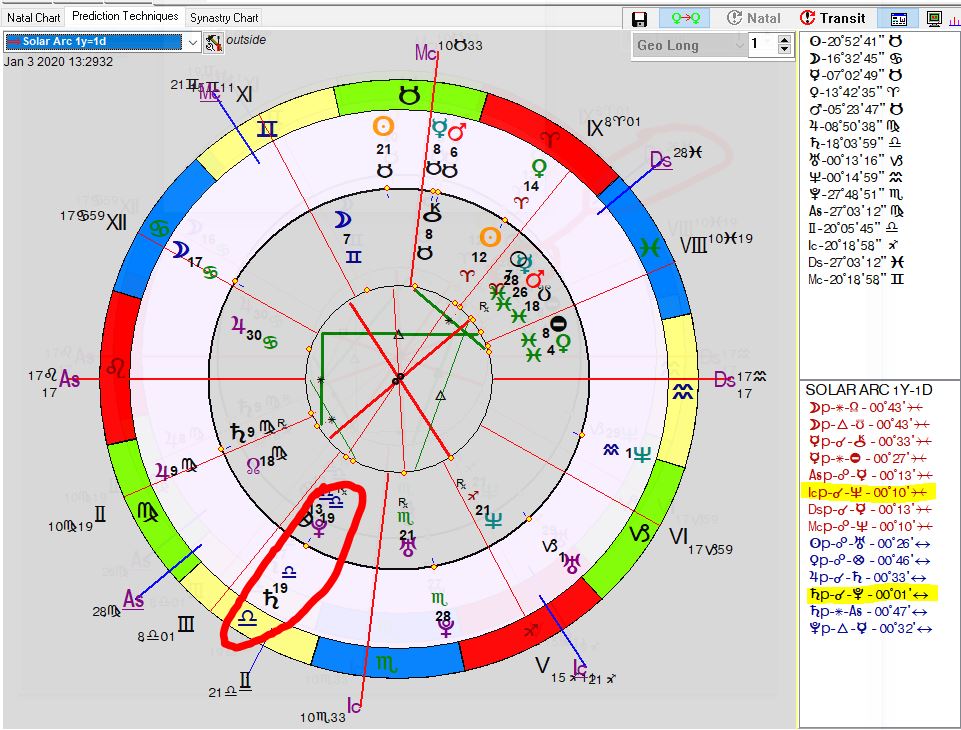 sulting in Iran deeming any US military personnel as terrorists.  Iran retaliated by a missile attack on a US base, but there w

ere no casualties.  The attack was viewed as a retaliatory move but not enough to incite further escalation.

The Solar Arc progression for that time has an exact hit for Saturn, ruler of Aquarius on the 7th house of open enemies.  Saturn also represents death or endings.  Pluto rules Scorpio on the cusp of the 4th house, ruling the land.  Soleimani was considered the second most powerful person in Iran next to the Ayatollah.  The other way it can be seen is that Saturn, authority, comes to death, Pluto.

Here are the transits for Iran in July.  The two charts below are for the transits for July, both forward and converse, meaning that we look at the planetary movements back in time equaling the distance forward in time. 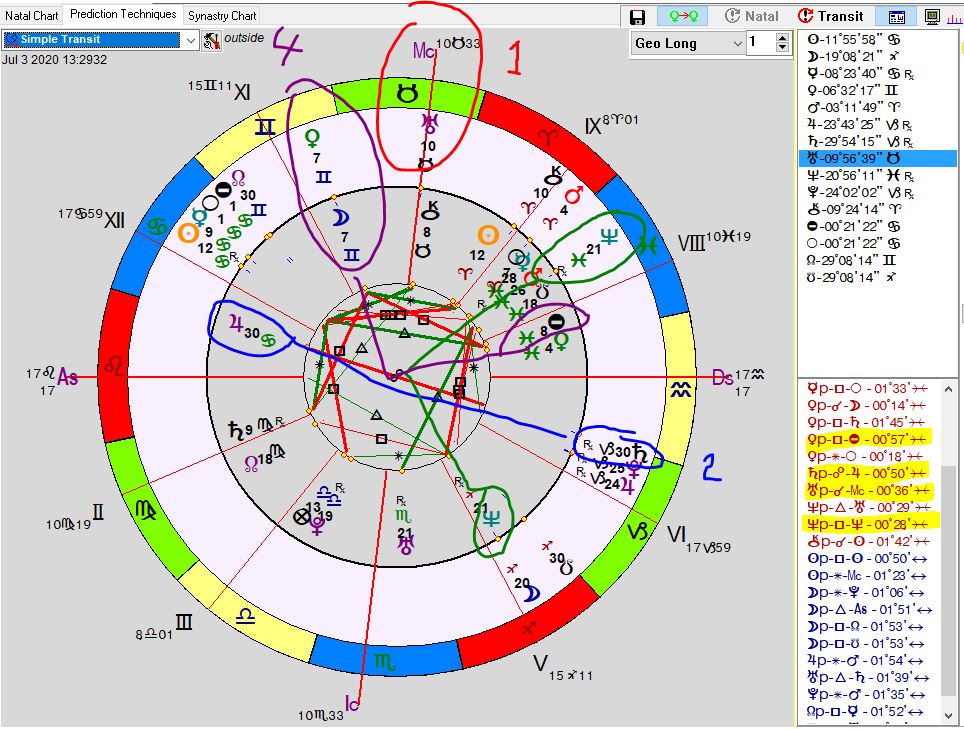 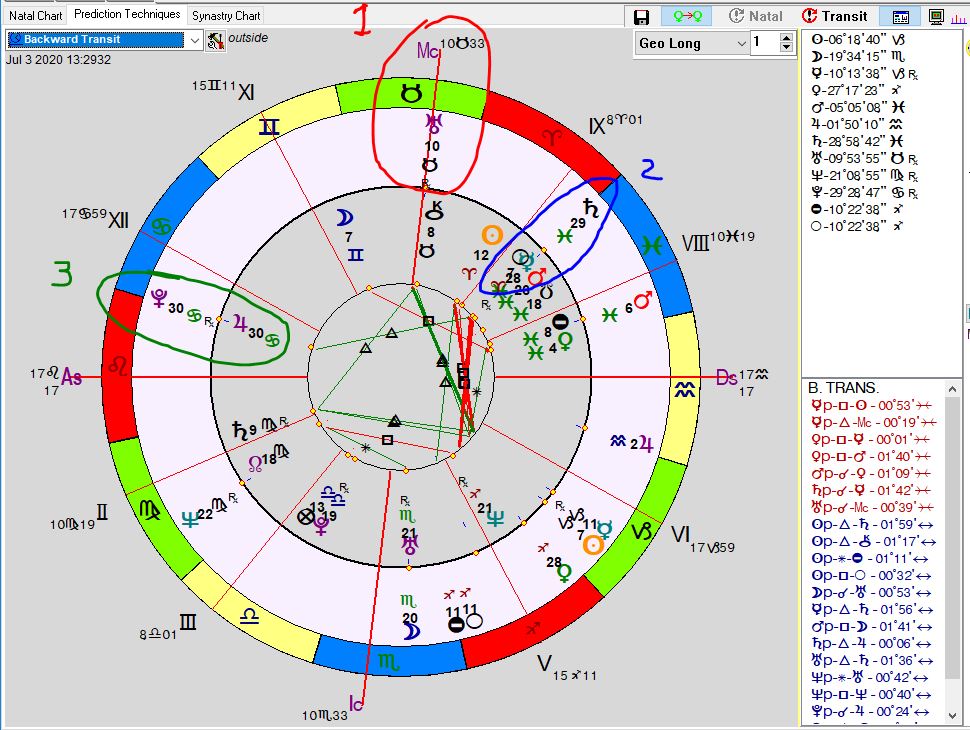 While Saturn, who represents difficulties/endings, is transiting in Iran’s 6th house of illness.  It is opposite Jupiter, who is the ruler of the 8th house of losses or death.  Jupiter is in the 12th house of institutions, or hospitals, suggesting this is manifesting itself as the global pandemic.  If we examine the dates of the transiting Saturn was opposite to natal Jupiter, it was exact on 29 February 2020, 28 July 2020, and 28 November 2020 it can be easy to see this represents the COVID 19 pandemic.

On 29 February, the government announced testing as they were starting to see a rise in COVID cases.  They have started to see a rise again in July, and from October to December should be a possible third wave and hopefully will be the end of this virus.

At the same time in converse transits, Pluto, death, is conjunct to Jupiter as well as highlighting the current situation.

Around 42 years after birth, Uranus will be opposite to where it was at birth.  Moving backwards it might not exactly be the case as Uranus has an elliptical orbit.  What ends up happening in July is Uranus ends up on the MC of the country’s chart in both cases.

With the modern ruler of Aquarius, the sign on the cusp of the 7th house of open enemies in play during this month, there is a significant risk of military engagement.  The Midheaven or the cusp of the 10th house represents the ruling body or government.   Transiting Uranus conjunct the Midheaven will be exact on these dates: 27 July 2020, 3 September 2020, and 28 April 2020.  We can expect an escalation of events around those dates related to rebellion against the government from within or from external enemies.

Uranus was discovered between both the American and French revolutions, so it becomes a planet of rebellions and fighting for one’s rights.  In December 2019, leading up to the conjuction of Uranus to the Midheaven, there were many protests and demonstrations.  Several hundred civilians were killed as government forces reacted.  Of course, the authoritarian government reported these numbers were exaggerated.  The protests dissipated as a result of the COVID-19 pandemic.

However, in July there were several unexplained explosions at key nuclear and military sites.  BBC reported the following events:

Some are speculating that Israel is responsible for the attacks, but Israel’s Defence Minister stated: “Not every incident that transpires in Iran necessarily has something to do with us”.  While that was not quite a denial, BBC also reported an unknown group called the Cheetahs of the Homeland to have claimed responsibility but have not provided any evidence of doing so.

Based on the astrological significators, Iran has a bit of rocky road ahead for the next year as Uranus will once more cross back across the Midheaven in April 2021.  Once the threat of COVID is over, the people might start revolting again, accompanied by further clandestine attacks.

These challenging aspects will be putting additional pressure on a country already crippled by massive sanctions, widespread COVID deaths, and internal frustration.  We can only hope the common folk can make it through this period.

In the afternoon on 27 November, Mohsen Fakhrizadeh was assassinated by a group of assailants on a highway north of Tehran.  He was Iran’s chief nuclear engineer, professor and a senior Ministry of Defence and Armed Forces Logistics.  Israeli Prime Minister Benjamin Netanyahu, said two years ago about Fakhrizadeh, “Remember his name”.

The chart shows transiting Uranus, the ruler of the 7th house of open enemies, is exactly conjuncting natal Chiron in the 9th house of the nation’s science.  Venus rules the 10th house of government.  Transiting Venus was in the 3rd house (highways) was opposite transiting Uranus and natal Chiron.  Isreal has not commented, and Iran has stated it will strike their enemies harshly, although, who that enemy is, is currently unknown. 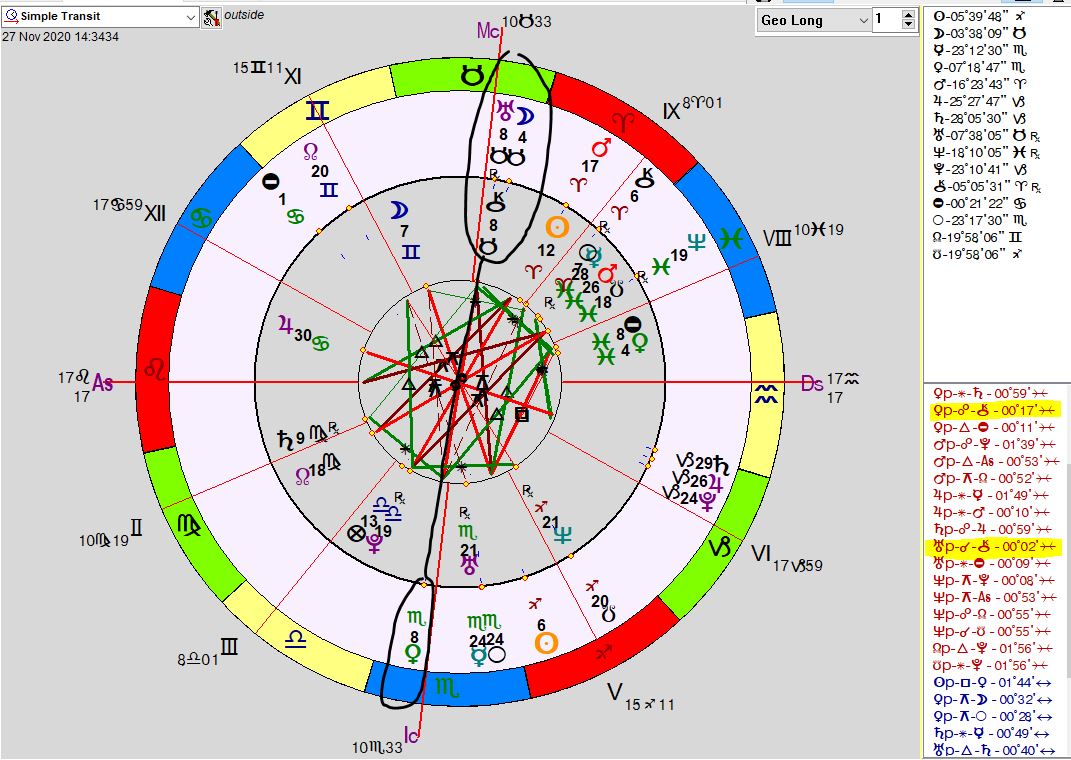 When transiting Uranus first cross over Chiron on 14 May 2020, the Iranian frigate Jamaran fired an anti-ship missile at its own support vessel killing several on board.  Uranus retrograde back over Chiron (Fakhrizadeh killing) and will go direct and conjunct Chiron once again on 28 February 2021.  Transiting Saturn will also be squaring the conjunction.  Saturn rules the 6th house which rules a country’s armed forces suggesting this time there could be an armed conflict.