Jim Morrison and The End

Jim Morrison was the lead singer of the sixties rock band the Doors. He was an interesting personality. As a teenager, he read philosophy books in high school, not because they were taught but rather on his own. He was reading Nietzsche, which is not the lightest reading a teenager can do, let alone a middle-aged adult.

Their 1967 self-titled debut album, The Doors, included a song called The End. This song was used by Morrison’s fellow film student Francis Ford Coppola in his movie Apocalypse Now.

Before the climax of the song, there is a spoken word portion which has the following passage:

“The killer awoke before dawn; he put his boots on.
He took a face from the ancient gallery
And he walked on down the hall
He went into the room where his sister lived, and…then
He paid a visit to his brother, and then he
He walked on down the hall, and
And he came to a door…and he looked inside
Father, yes, son, I want to kill you
Mother…I want to…”

This is an apparent reference to the Greek tragedy Oedipus Rex where the King and Queen receive an omen from the Oracle of Delphi that their child will kill his father and marry his mother. In order to defy fate, they send the child away to live in a foreign land. The child grows to become the king of the adjacent kingdom and returns to conquer his homeland only to unkowningly kill the king, his father and then wed the slain king’s wife, his mother.

What is in his chart that would make him sing about this other than being interested in the classics? 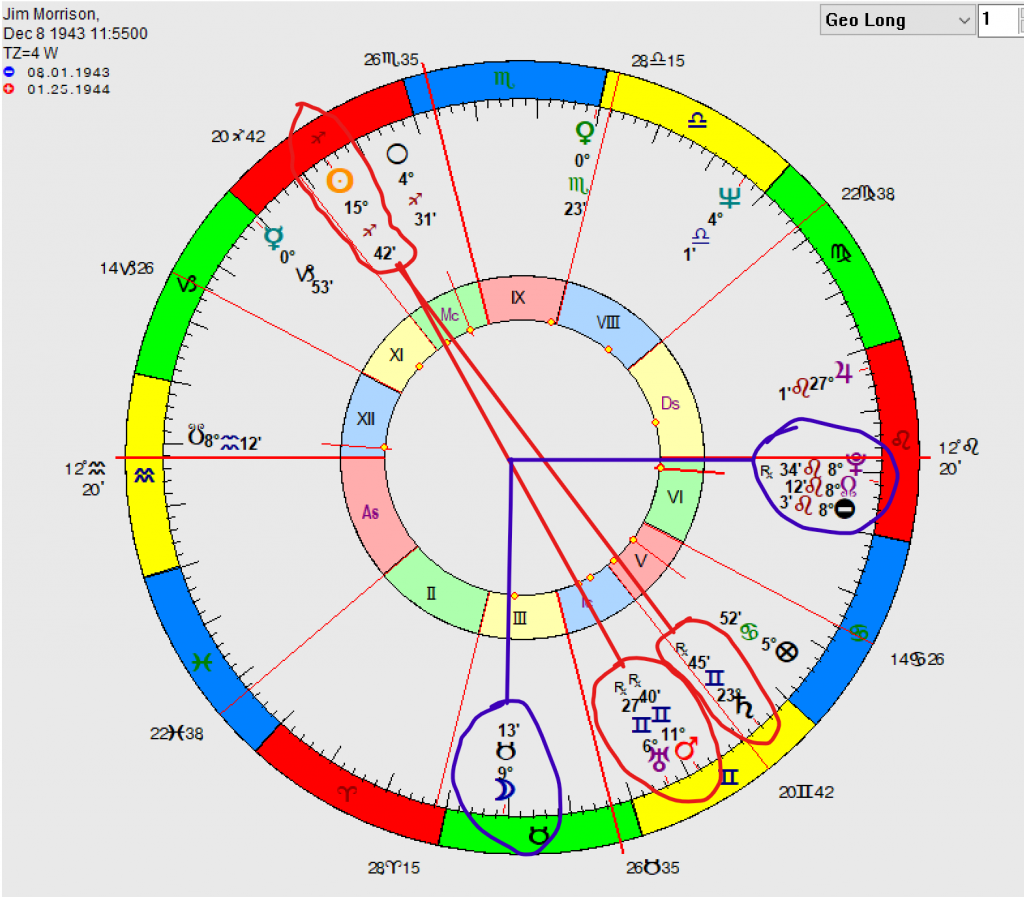 Morrison’s biography, No One Here Gets Out Alive, states that he had difficulties with his father. The elder Morrison, George Stephen, was a flag officer in the US Navy. He was regimented and strict with Jim. This is reflected in the chart with Saturn and Mars opposite Jim’s Sun. The Sun is a person’s identity or persona. The stern Saturn and military Mars are opposite this free-spirited and philosophical Sagittarian Sun. The younger Morrison was noted to have difficulties with his father, especially since he enrolled in film school.

Stephen Davis wrote another biography on Morrison in 2001 called  Jim Morrison: Life, Death, Legend. In this book, Jim reported a man close to his family had sexually abused him at six years old. The abuse was reported to Morrison’s lawyer, Max Fink.

Pluto will Solar Arc to the Descendant of this chart around when Morrison was four and a half. He could have been born a few minutes later, or he may not have been sure of his age. Note: the recorded time of birth may not be 100% accurate.

“When Jimmy tried to tell his mother, Fink claimed, she had gotten angry, called him a liar, and insisted such a thing could never have happened. Fink said that Jim began to cry as he told him the story and claimed Jim had said that he could never forgive his mother for this.”

As one can see, Pluto (sex) is square the Moon (mother). The North Node and the pre-natal eclipse are also conjunct to the Moon. This adds further evidence that Jim’s story could be true, whether or not the age is correct. His anger towards his mother is evident in the chart and can be interpreted that he was lashing out in the song.