Horary Astrology is the art of interpreting a chart usually to get a yes/no answer and it is based on the time the question is asked.  You can answer such questions as: should I take this job? Should I marry this person? Should I buy this house? There are just a few examples of the type of questions a horary reading can answer.

In most cases, the time the chart is set for is the time the astrologer understands the question as some questions may have multiple layers and the astrologer must connect the dots.  The location used is the astrologer’s location.  In the case of a crime such as the disappearance of a person, my good friend and world-renown astrologer Alphee Lavoie (www.alphee.com) has taught me to use the time that the 911 call is made (or 999 in the UK).  You set the chart for that time, and you use the location of the where the 911 call was placed.  Mr. Lavoie has worked with the FBI on missing person cases.

When I hear of story of a missing person, I usually try to follow along with the news to see if I can help.  However, without the time of the 911 call, which would come from the police, I will have to make some assumptions.  This is one such case where I followed.  The murder of Sara Baillie and the disappearance of her daughter Taliyah Marsman.  On Monday, July 11, 2016, relatives of Sara Baillie became concerned when they were informed she didn’t show up to work.  Later that evening, they went to her house and discovered that she had been murdered, and her 5-year-old daughter, Taliyah, was missing prompting the police to issue an amber alert.  The girl was last seen with a suitcase and a man who coincidentally matched the description of her estranged father but the father was in contact with the police and was cooperating with them.  He and the woman’s relatives were making a desperate plea to have the girl returned safely.   This horrific event happened in Calgary, Alberta.

I do not know the time the 911 call was placed but the police say it was around 20:30 pm, so I will use 20:30 as the time of the 911 call.   This gives the following chart for the crime and to the whereabouts of the little girl.  Now despite not knowing the exact details I will demonstrate how well this chart works, suggesting it is very close and my assumptions are correct 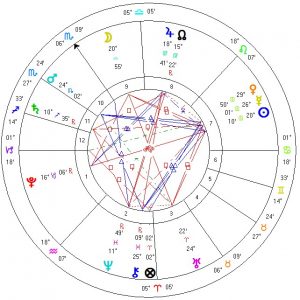 The other important fact is who made the call.  This information sets up the chart, as I will describe later in this article.  From the news reports, relatives found Ms. Baillie murdered in her home of the 1000 block of Panamount Boulevard N.W. Calgary, Alberta.  Since the people talking to the press from her family were her aunt and uncle, I have to assume it was they who found her.  This would mean the ascendant of the chart (area marked 1) would be the aunt and uncle.  In a horary, the first house is the person asking the question so the chart will be read relative to them.

However, before we even move on, you can see Pluto (crime, murder, and death) is in the first house.  It is opposite the Sun (male, father).   The planets Mercury (children) and Venus (women) are not in the orb of Pluto, but based on their proximity to the Sun, it suggests that they were brought into the matter.  This is merely conjecture, but the crime could have been retribution on the father.

To determine the girl’s whereabouts, we must look at what is known as derived houses.  The cusp of the first house, we have determined, is the aunt and uncle.  The third house of a chart rules siblings.  So the cusp of the third house would be the sibling of the aunt or uncle who would be Ms. Baillie’s parent related to the aunt or uncle.  The fifth house rules children; therefore, the fifth house from the third would be the cusp of the 7th house, which represents Ms. Baillie (the child of the sibling of the person asking the question or the person who made the call).  The 5th from the 7th would be the cusp of the 11th house which would represent little Taliyah (7th being the mother and 11th being the child of the mother).  The cusp of the 11th house has Scorpio, which presents us with a little bit of a dilemma.

Scorpio is ruled by 2 planets, a modern planet, Pluto, and a traditional planet, Mars.  Some astrologers only use the traditional planets for horary questions but Alphee Lavoie has taught me to examine both.  I first check to see which of the planets make sense.  In this case both do so I use the traditional ruler first and then the secondary ruler if I’m not having any luck.  This part is important to determining her whereabouts as it sets up the direction and the surroundings.

In this case, I 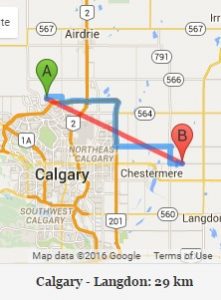 have picked Mars to rule the girl.  Mars is at the end of the 10th house.  The 10th house is the south direction.  The 11th is southeast.  Calculating the distance is tricky.  Is it 100m, 1km or 10km, 100km?  The Moon is used to help determine distances as it is a co-ruler of the question. The Moon is approximately 34 degrees from Mars which rules the girl.  The Moon is also about 26 degrees from making an aspect to Pluto.  So that would mean to search anywhere from 26-34 metres, hundreds of metres or kilometres.  My guess would put it at 30Km based on the chart showing cardinal and fixed.  The Moon-Pluto (both cardinal) would put it closer to 3.0 but since one is fixed and one is cardinal then I would go with 30Km.

Since Mars is in Scorpio the location would be related to Scorpio.  Scorpio rules places where waste is deposited, swamps, gardens, ruined houses, near stagnant water.  The Sun, Venus and Mercury all aspect Mars.  So the place may receive a lot of sun and there may be an incinerator or heat source nearby.  The sun could be a tower, therefore in this area a silo.  Mercury, could be a place where vehicles are parked or gather, be they cars or tractors.  There may be a post office or an office nearby.  Mercury also rules wheat which is found all around Calgary.  Venus also rules wheat fields so this would suggest a field.  Venus suggests there is a broker, maybe some artistic place with fine things.

Unfortunately, things turned out for the worst.  Police located the girl’s remains approximately 30km from where the 911 call was made.  According to a National Post article, searchers located the remains off of a roadway eight kilometres east of Chestermere, off McKnight Boulevard, in a rural field with some storage or grain bins.

The Moon rules timing in the chart.  In the chart below, the inner chart is the 911 call and the outer chart is when the Moon connected with Mars (the girl).  This occurred at 16:21 on July 14th which is close to the time searchers found the girl.  Calgary police released the following notice on Thursday, July 14th:

We are deeply saddened to report that a body, believed to be Taliyah Leigh Marsman has been located. First-degree murder charges in relation to the deaths of Taliyah and her mother Sara Baillie are pending.  Late this afternoon, searchers located a body on a rural property east of Chestermere. The exact location of where the body was found will not be released to protect the integrity of the scene. 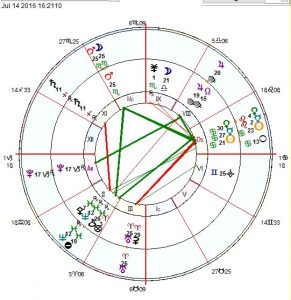 Sometimes you find that things turn out okay as I was hoping in this chart but there were indicators suggesting otherwise.  You can only hope, but when examining a chart, you need to look at the facts and remove your bias from the chart.  My sympathy goes out to the friends and family of the victims of this heinous and senseless crime.

Have a Horary Question You Need Answered?