Nepal was declared a Kingdom on September 25, 1768, after the Ghurkas captured Katmandu and the Ghurka ruler Prithvinarayan Shah declared himself the King of Nepal.  Nepal is land locked country situated in the Himalayas between India and China and is the home of Mount Everest.  When the Ghurkas moved to attack Katmandu, the King fled leaving the throne vacant.  Shah stepped in and the court pledged their allegiance to him however, not trusting them he ordered them to be beheaded along with their families.  The country had been a monarchy until it became State in 2007 and then a Democratic Republic in on May 28, 2008.

For non-astrologers, when I mention a planet I will put the  interpreted meaning next to it in parentheses.  For instance, if I was talking about your parents in your astrological chart I would say the Sun (father) and Moon (mother) or 4th House (home).   Planets and houses and signs have various meanings which is what makes astrology so difficult to interpret at times. Also, Natal means the birth chart and transiting means the current planetary positions.  There other more complex techniques such as solar arcs and progressions and the converse or backward motion of these methods.  Just briefly, a solar arc is when you take the Natal chart and advance all the planets 1 degree for a year.

We do not know the exact time the Kingdom of Nepal was actually established as a country.  When faced with this dilemma, an astrologer will work with the approximate chart and compare it to the timing of the major events in the history of the country.  The Natal chart is adjusted in order for it to line up with timed events.  This technique is known as chart rectification.  This method can also be used to correct or determine a person’s birth time based on events in his or her life.  I have determined September 25, 1768 18:48 LMT (Local Mean Time) as a time when it could have been declared a country.  This could use some tweaking but it is good enough for purposes this article.  It gives the resulting chart. 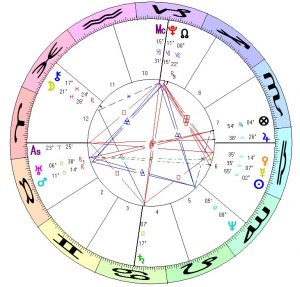 On April 25, 2015 at 11:56, Nepal was hit by a 7.8 magnitude earthquake.   Earthquakes in astrology are ruled by Uranus and Pluto.  We are going to examine the chart of that day as compared to the Natal chart.  On that day, Pluto and Uranus were 90° apart or in a square aspect in the sky. Therefore, if these two bodies were to connect to a major part of the Natal chart then there should be a catastrophic event and that event could be an earthquake in country’s chart.  We will check the position of the planets at the time of the earthquake to the birth chart of Nepal.  I have circled in various colours the connections in the chart.

BLUE: In my chart for Nepal

, Pluto (earthquakes, death, destruction) is contacting a the Midheaven and squaring Uranus (earthquakes).  The Midheaven represents the top of the sky which is a major angle in the chart.  In your birth chart it represents how you are scene in the world or your career/vocation.  In a country chart is is the government and can be seen as the public face of the country

RED: the transiting Sun (the identity of the country) is connecting to the natal Uranus (earthquakes) and while this happens once a year, it is not always with the other configurations such as the Pluto/Uranus.

GREEN: Chiron, the asteroid that rules the wounded and healers, is on Nepal’s Moon which represents the general populace.

I have started using backwards transits recently because of my buddy Alphee Lavoie showed me that this technique can show some interesting connections.  The converse transits, takes the time you are born and moves the planets backwards in time the equivalent amount as you go forward in time. If you are 50 then you look at the transits 50 years before you were born.  In this chart the following can be seen: 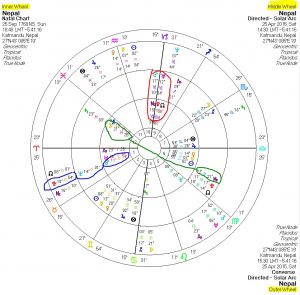 Using a technique called Solar Arcs in both forward and backward motion also shows there were some connections to the Natal chart.

BLUE: Converse Arc Pluto (death/destruction) connecting to Mars (violent) both planets are the co-rulers the 8th house of death!

RED: Mars and Uranus in Arc connecting to the Midheaven.

GREEN: in the solar arc chart there is a connection of the arced Midheaven opposite the Moon (populace).

This is interesting enough but I decided to see if Nepal had any another major earthquakes and examine how they connected up to the chart of Nepal. 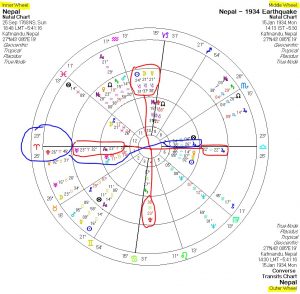 .  If we examine what was happening them we find the following:

RED: Pluto was squaring Uranus.  Remember, these are the planets that signify earthquakes.  In my chart of Nepal, it hits the ascendant or the people and identity of the nation.   However, it is also connected with the Sun and Jupiter making a grand cross in the chart.  This is a significant event.

BLUE: In converse transit, Pluto (earthquakes) on the Ascendant (the people) is opposite Jupiter (large, expanding).

How about in Solar Arc Directions?   RED: Solar Arc Uranus on the horizon, on the Descendant opposite the Ascendant in direction.

GREEN: The Solar Arc Sun on the Ascendant. 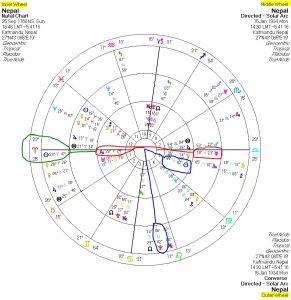 With the connections of the two earthquake charts to the major points of the Natal chart, it suggests that my timing is very close to being accurate.

What does the Future Hold?

The previous time there was a Pluto square Uranus was in 1876 but I have only been able to find an earthquake that occurred in neighbouring Burma.

In 2048, Pluto will be opposite Uranus with Uranus on the natal Neptune.   That could be an earthquake that involves water. – maybe avalanche?   The next time, Uranus and Pluto will be square will be in 2073. With Pluto in Aries and Uranus in Capricorn.  Neptune will be on the Midheaven then maintaining the water theme of the opposition.  We will have to wait and see.