On 11 August 2014 at around 11:55 a.m. PDT, Robin Williams was discovered dead from an apparent suicide by hanging. It was reported he had been battling depression over the recent period. With his passing, we all reflected on what an actor and what an inspiration he was. Many people I know remembered his golf sketch from his standup routine, while others remembered his films, and yet others talked about me mimicking Mork from Ork. Obviously, with actors and other famous celebrities we are aware of their works but rarely get a peek at their personal lives. Robin Williams had the secretive sign of Scorpio on the ascendant of his astrological chart, so naturally, he would not let you a peek into him especially since the ruler of the chart is Mars in the 8th house. The 8th house is the astrological garbage bin or of hidden secrets and taboos or of transformation. The ascendant is what reflects who we are.

One thing we did know about him is that he had addiction issues. The Moon in Pisces is one factor since Pisces is associated with drugs and alcohol and escaping and the Moon with how we get our needs met. He also had a Neptune (17° Libra) square Mars (12°Cancer) the ruler of the chart or of Williams himself, which is a signature of someone who is a heavy drinker. This is also aided by the fact that Jupiter (abundance) is opposite Neptune and squaring Mars making it a complete T-square. Square aspects are not generally bad but they do provide a bit of tension and in the case the Neptune square the Mars makes his alcoholism a problem. It did also reflect other more positive aspects of his personality too. Like most aspects if you are conscious they are positive but if act unconsciously they can be negative.

However, it is this same energy along with Uranus that was conjoined with the Mars that made him the performer that he was. Uranus is about sudden, radical and uniqueness. Mars ruled who he was and throw big Jupiter that expands or is big and is philosophical and knowledgeable and add that to the Neptune (imagination, theatre) you get Mr Williams! He was erratic but knowledgeable. I watch one of his live performances where he was walking through the crowd, spots a woman’s suede jacket, he picks it up and says “Ah, look the Marquis de Suede” as a reference to Marquis de Sade. Most of his performances were adlibbed (Uranus on Mars) such as the Walt Disney animation Aladdin, to which the animators were required to draw what he was saying rather than following a storyboard and a script. Like Pisces, the fish represents the vast ocean, Williams psyche (the Moon) was in that ocean of imagination. To come up with some of his routines, he pulled from the universe. 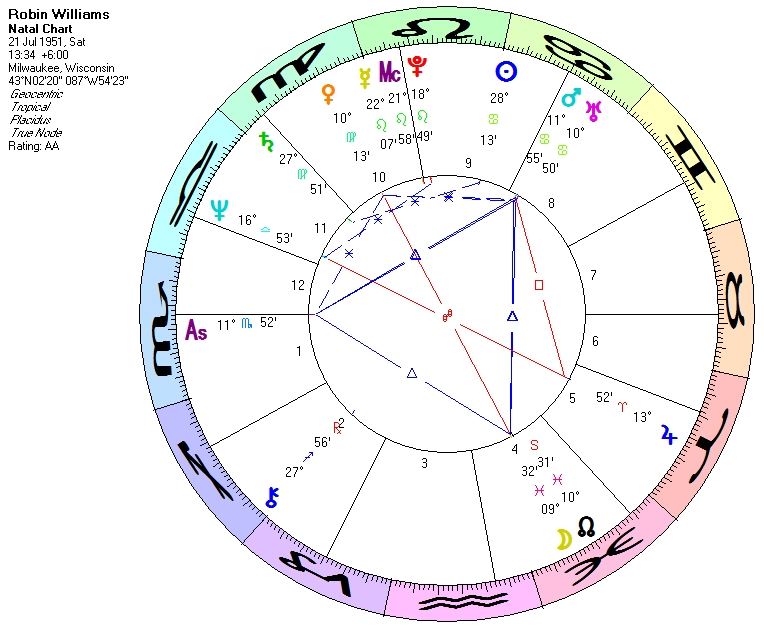 His powerful presence came from Pluto (Power, seduction and control) on the Midheaven or the 10th house of career or how we are seen in the world. He often, no matter how chaotic he was, seems to be in complete control of the situation. Mercury, the trickster god, was there as well. Mercury also represents communication and how he thinks so he was there to help bring that amazing mind to the public.

At the time of his death, Saturn which can represent difficulties, learning, and the taskmaster had just come out of his 12th house of the unconscious or self-undoing. Saturn’s transit through the 12th house is usually very difficult for most people to handle. We all go through a bout of this every 29 years from the first time it happens which will occur sometime within your first 29 years of life. Once it crosses into your first house (vitality, you, the person people see), then you start to reshape yourself and, while it is still difficult, at least in the first house you have a better vision of Saturn rather than in the hidden and mysterious 12th house.

At the time of Robin Williams death, transiting Mercury, the planet of communication was on his Midheaven but interestingly it rules Gemini which is situated on his 8th Cusp (house of death). Mercury/Hermes was also the psychopomp who lead the souls to Pluto/Hades. So his death was communicated to the world. The transiting Sun was on his natal Pluto (the planet of death). The transiting Midheaven when he was discovered was right on his Sun in Cancer. Again, the world will know about what happened to him.

For those who understand astrology, we could expound on this but for those who are not, you may be a bit confused but I hope I gave you some insight in how astrology works and how it can be helpful. If Robin Williams had an astrologer, that person would should have told him he would possibly start feeling depressed when Saturn entered his 12th house in October 2011 and that it would be done by October this year 2014, he might have had a different outlook on his life, at least knowing that the end of that phase was near.

Anyway, Robin Williams, thanks for all the laughs.

When you understand how your car behaves, you have better control of the race.  Same with your life.