The point is that the United States is going through their Pluto return this year. A Pluto return happens every 246 years. Obviously, people do not experience a Pluto return, but nations do. A Pluto return signals the turnaround of power or regime collapse. That does not mean a country will die, but if that nation is an empire, then you can expect that empire to experience a decline. There will be power struggles, whether within the government, the government against the people, or people against people.

Pluto is also a planet of violence, and the rate of violence in the USA is increasing. The country was founded with a violent revolution, as well as the slaughter of indigenous peoples, slavery of African Americans, and gun-toting violence perpetuated it.

The Roe vs Wade ruling is sparking outrage and counter rage. Let us look at what is going on in the chart. The United States chart is the Lavoie chart 4 July 1776, 16:56 Philadelphia, Pennsylvania. The Roe vs Wade overturning occurred on 24 June 2022 at 10:11. If we look at the time of this event on the USA natal chart, we can see several connections between them. 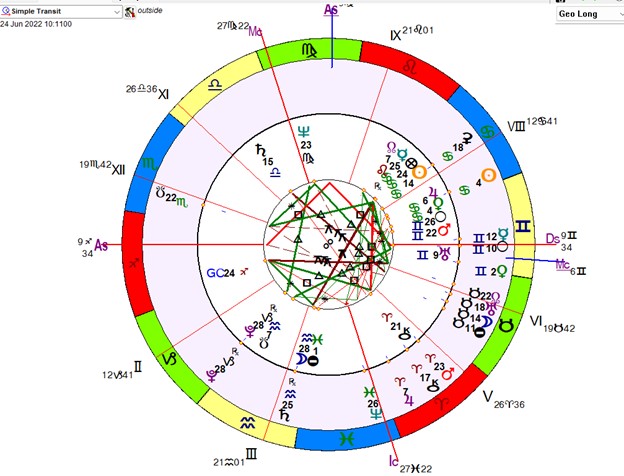 All in all, it is going to be a rough ride for the United States over the next two years. I will look at the upcoming midterm elections later and the subsequent presidential elections later.