How Can a Tarot Reading Help You?

Like a Rune reading, nothing is by chance.  The cards that are laid out during the reading will be about the most pressing subject whether it’s on the forefront of your mind or in your subconscious.  For example, someone came to me wondering about their marriage but the cards described a boss and her relationship with co-workers.  This didn’t mean the marriage wasn’t important in their life but rather the real issue that needed addressing was how to cope with the work environment . In the reading we’ll discuss the past, the present and the future and how to deal with the issues at hand.  Think of this as more of a counselling session on how to cope with the situation rather than telling you that you’re going to meet Prince Charming and win the lottery.  I’m not here to tell you about curses or things like that. You can go to a neon hand if you want that kind of stuff.

You will shuffle the cards and give them back to me. I will start to pick up information and we will discuss the general information. Then I will lay down the cards in a pattern that signify various areas of your life such as past, present, and future. The cards basically tell a story of what is going on in your life pertaining to the question.

Some say Tarot cards date back to the Middle Ages and are associated with the Roma (Gypsies). Others say they are an ancient system dating back to the Egyptians. Although most of the pundits believe it was the former. “Do Tarot cards really work?” I usually hear that question a lot. Tarot cards do not work! They are a collection of images placed on 78 cards. The interpretation of these images and how the images trigger the reader’s psychic ability is actually what is at work here.

The cards are divided into two sections: the Major and Minor Arcana. The Minor Arcana are like what you see in playing cards, Ace through 10, and instead of King, Queen, Jack, the Tarot cards have King, Queen, Knight and Page although the latter two are sometimes Prince and Princess.

What is left of the Major Arcana in playing cards is the Joker which is the Fool card. The Major Arcana tells of a story of our path through life which gets repeated. Some people are frightened by such cards as Death and the Devil, which make people think that the cards are evil. The Death card signifies transformation – the end of one thing to allow for something new to be born. The Devil card represents something that chains us such as a dependency or Karma. There are hundreds of Tarot cards available, and the artwork is varied, but to be Tarot they must follow the 78-card system of Major-Minor Arcana; otherwise they are what is referred to as an oracle deck.

Tarot cards are an excellent tool for learning about yourself. They can help uncover issues and bring them to the forefront. The cards are a great way of looking into your subconscious to help you uncover the hidden issues that you are not aware of. Can they predict the future? Yes, provided that you continue on your current path. If you take the time to make corrections or adjustments in your life, then you can alter the outcome of the reading. Only you are master of your destiny! 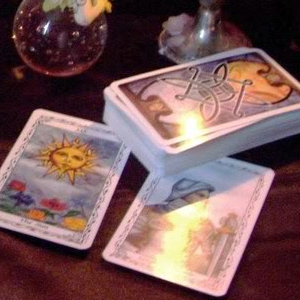