This article is a brief explanation of some astrological principals.

Astrology is generally based on the position of planets in our sky relative to one and other.  This is called Geocentric.  Heliocentric, Helios being Greek for the Sun, is the planetary positions relative to the Sun.  There are a small group of astrologers who do use this, but a majority use Geocentric.  Why?  Because you look at life from your own eyes.

Around maybe four thousand years ago, astrologers looked at planetary positions in the sky relative to each other and looked at the backdrop of the constellations.  Just over two thousand years ago, astrologers set up a system that we are currently using.   To understand this, you have to go back to junior high school trigonometry.  A circle has 360°, and if you divide that circle in 12 you have an equal 30° per section.  Now those 30° sections lined up on average with the star clusters called the Zodiac, with some being larger and some being smaller but they average around 30°.

Two schools of thought evolved at that time.  The Sun’s zodiacal position at the Spring Equinox has changed over the years due to the tilt of the Earth shifting.  This phenomenom is referred to as the Precession of the Equinoxes.  So the Eastern or Hindu or Vedic astrology follow this system which is called Sidereal. So the Zodiac shifts for them.

Let me give you an example:  If you were born on March 22 in Tropical, you would be an Aries, but in Sidereal you would be Pisces. Sidereal position of the equinox changes 1° every 72 years.  So in about 140 years, a person born on March 22 would still be Aries using the tropical system, but they will be an Aquarius in the Sidereal system.  However, in June 2048 Jupiter in Gemini will be square Pluto in Pisces, but in Sidereal they are in Taurus and Aquarius respectively but still squaring each other.

Now, that we got that out of the way, we can talk about what do conjunctions, squares, oppositions mentioned in the Saturn Pluto article:  geoffl53.sg-host.com/the-saturn-pluto-cycle.

The picture below is an image of the sky on January 27, 2020, how the Sun, Mercury, Saturn, and Pluto were all conjoined.  It is day time, but the sky was darkened for visibility.  While in tropical we are saying those planets are in Capricorn you can see the constellation behind is Sagittarius. 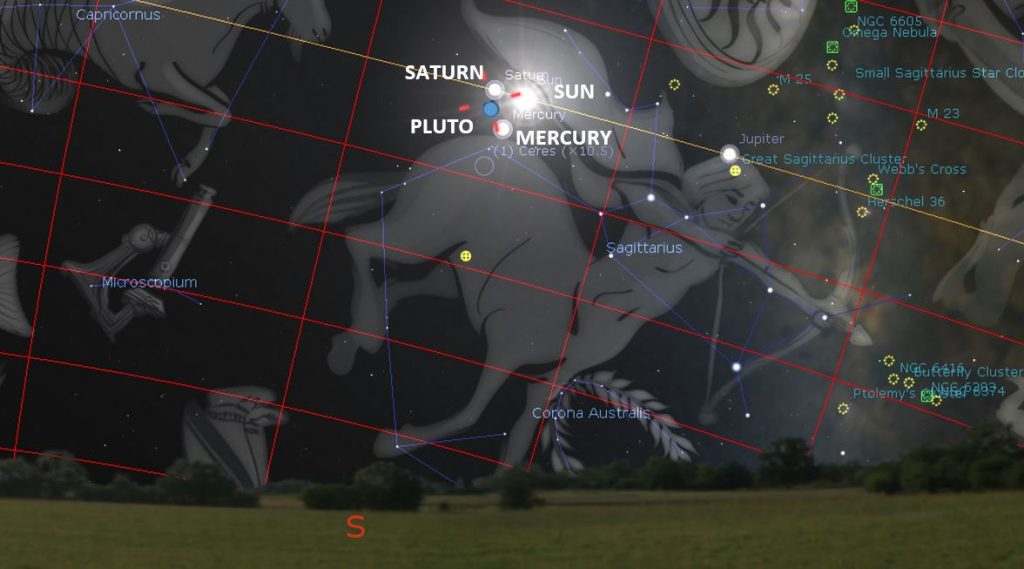 This illustration below will show you the rough position of the planets of the January 2020 conjunction of Saturn and Pluto relative to the tropical horoscope.  Earth would be the centre of the chart, and we are looking out from there.  Also, I have shown on this diagram, the position Saturn if it was squaring Pluto.  As you can see they are at 90° from one and other.  Also, shown is what planetary positions would look like if Saturn was opposite Pluto. 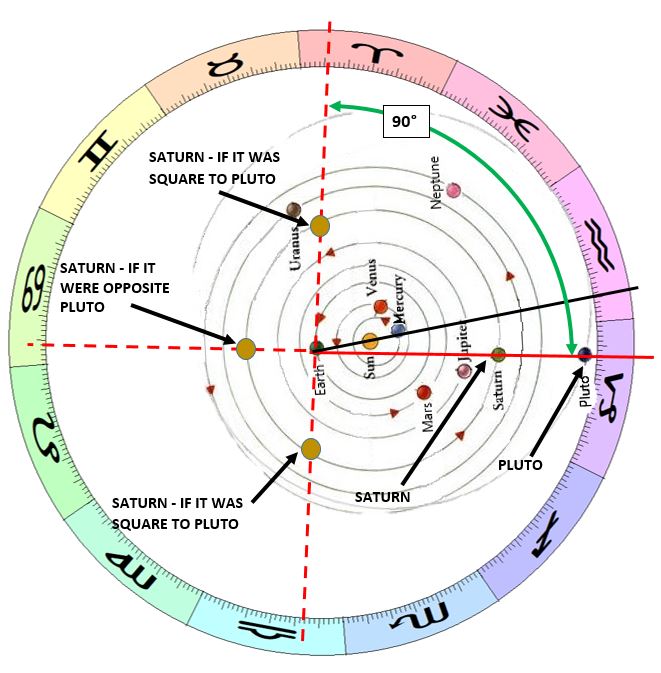 Plaents superimposed on the Zodiac

The purpose of this article was to explain concepts of conjunction (conjoined), squares and oppositions and how they look both astrologically as well as astronomically.  These are the difficult dynamics in astrology as opposed to the 60° (sextile) and 120° (trine) which are more beneficial aspects.