What is happening to Tiger?

Tiger Woods has had a sparkling career up until that fated day on November 28, 2009 where he crashed his SUV outside his Florida home. Afterwards, all the proverbial hell broke loose! How did his career suddenly lose its luster so quickly? Well, one of the culprits…Uranus! Actually, it is not that the planets affect our lives but rather they reflect what is happening in it. It is up to us to decide what shape we would like to see in the reflection. If we don’t, then the universe will decide that for us. If you work out you see an athlete the mirror, if you eat junk food and sit on the couch, you will see the opposite.

Before we look at Tiger Woods’ natal chart, I should briefly touch on some astrological basics. Astrology is made up of planets, signs and houses which can be respectively likened to actors, scripts and stages. The actor, the Sun (your will, ego and characteristics), will act differently using the script of Leo than that of Pisces. Also the actor the Sun acting the script of Leo will display himself differently if he is acting on the stage of the 10th house (career) versus the 7th house (relationships).

Most people know the planets and signs but most are not familiar with the astrological houses. There are different house systems but basically the chart gets divided into 12 sections representing different facets of life from relatives, friends, money, illness, learning and career. All systems start at the ascendant which is the sign on the eastern horizon the moment you were born. There are whole sign house systems. For example, if the sign of Cancer was on the eastern horizon when you were born then first house will be all Cancer, the second all Leo and so on. In most western astrological systems, the houses are not necessarily equal. They are divided around the sign on the horizon and the sign at the highest point in the sky. The farther north (or south) of the equator you go then the bigger or smaller the gap is between those two angles. You can have equal houses in this system but that depends on the time and time of year you were born.

The main points in the Western house systems are very important parts of the chart and are referred to as the Cardinal Axis:

When you are born, the astrological chart of that time is what is called your Natal chart. The planets however, do not stand still and they will circle the chart at different speeds for instance Venus every 184 days, Mars every 2 ½ years and Pluto every 256 years. Where these planets contact planets or points in your natal chart will describe the various energies that will come into your life at that time. In astrology, the planets of the current time are referred to as transiting planets.

The inner wheel is Tiger Woods’ natal chart. The outer wheel is the position of the planets on November 28, 2009. 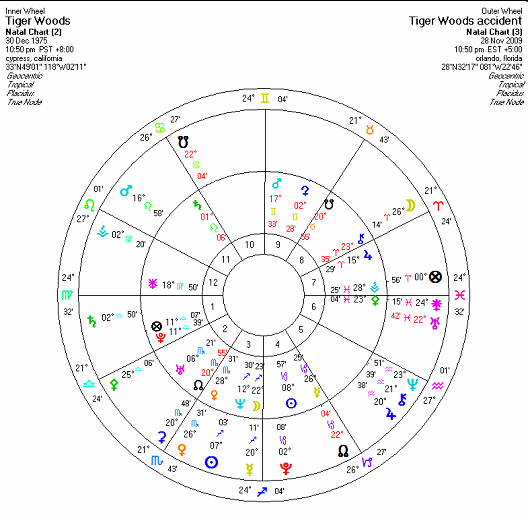 The main in Tiger Woods’ chart, the cardinal axes is at 90° to each other. This means that if a transiting planet contacts one of these points on the chart, then all of the other points will be affected. While these points are not physical representations, they do have a very strong power of their own especially when they are triggered by a planet traversing the sky will bring energy to them. The energy of that contact is dependent on the aspect angle, which could be beneficial or difficult, as well as the planet making the aspect.

Now enter Uranus. Uranus in the sky today, December 2009, is making contact with Tiger’s 7th house of relationships. Uranus is the unexpected, the rebel, the planet that comes in like a lightning strike and lets you deal with the aftermath. It likes to shake things up. However, as mentioned before not only is Uranus shaking up his relationship because his angles make 90° angles to each other, Uranus is activating all four points at the same time. Let us examine all these points. Since the ascendant is opposite the descendant then anything that happens to your relationships also affects you. So now Uranus is opposite Tiger’s ascendant shaking up his personality, his health. The ascendant is often described as the mask you wear to face the world and that is no doubt being affected now.

When planets are 90° apart from each other they for form a difficult aspect called a square. Squares suggest that the planets are in conflict with each other. Uranus is squaring both the IC which is his private self as well as his home life (4th House) and his MC or his career (10th House). This is coming fairly quickly with sponsors withdrawing their contracts within a short two weeks of his sex scandal coming public.

Planets will normally move from east to west across the sky but due to an optical illusion based on the relative motion of the Earth and the planet, the planet may seem to move backwards across the sky every once in a while. This motion is called retrograde motion. The Sun and the Moon never go retrograde. In Tiger’s chart, Uranus hit his descendant in April 2009, stopped and went retrograde in August 2009 and crossed his Descendant at the beginning of October, stopped and started going forward again on December 2nd. It was like it ran him over and backed up and ran him over again. When it went direct on his Descendant for the last time it brought out the scandal. Uranus will cross his Descendant for the last time in February 2010, so look for more fireworks then.

The scientists demoted Pluto but never mind, he still packs a punch. Pluto likes to expose power and sexual secrets and likes to bring up dirt as well as destroy things. When Pluto (sex and power) moved through Sagittarius (foreigners, religion) from March 1995 to November 2008, we saw the Catholic Church plagued with scandals as well as the rise of fundamentalism in religion. When Pluto hit Capricorn (status quo, social order) in the spring of 2008 and then again in December 2008 we saw Pluto pulling the stops out on a corrupted banking system and the world economy. Pluto has similar effects on an individual’s chart.

In the spring of 2008, transiting Pluto made a difficult aspect called a quincunx to Tiger’s natal Saturn which is the ruler of his 5th house of lovers, children and play (fun and sexual) and his 6th house of everyday work and health. Because Pluto’s orbit is long and the planet is far away, it can retrograde and go direct over the same spot for up to two years. Pluto contacted Tiger’s Saturn again in January, July and in October 2009. It will come back not for a direct hit but will be close enough for a reminder in September 2010. Pluto definitely rules sex but also sexually transmitted diseases. Could he have contracted some sexually transmitted diseases during this period? Pluto likes to come out of the ground every once in a while and bring things to the surface (read his story).

Saturn is another planet that likes to bring difficulty but more in the sense of that teacher or coach that pushes you so hard to become the best that you can be or collapse under his weight. But if you do the work, you will be strong. Saturn, which rules Tiger’s 5th house of lovers and play was transiting through his 12th house of the unconscious and self-undoing from September 2007 until September 2009. Then it hit his ascendant meaning he had to get his act together. It will stay in his first house until the autumn of 2011 where it will hit his 2nd house of finances. This could be when he pays for alimony or make some settlements.

Some astrologers don’t use “space debris” such as asteroids, however it is interesting to notice that the asteroid Juno, which represents the wife principal and commitment to marriage or partnerships is conjunct the Descendant, the point of relationships.

Needless to say he will have a few years of difficulty ahead of him. As you can see this did not have to be a bad experience for him but because of the choices he made it just caused trouble. If he consulted an astrologer, he would have experienced some difficulties but not to the extent that his undergoing now. I hope this example will show you what you can learn from the life lessons highlighted by the planets in the sky.